Always Prepared: A Lesson From the Forest - DUDEronomy

Always Prepared: A Lesson From the Forest 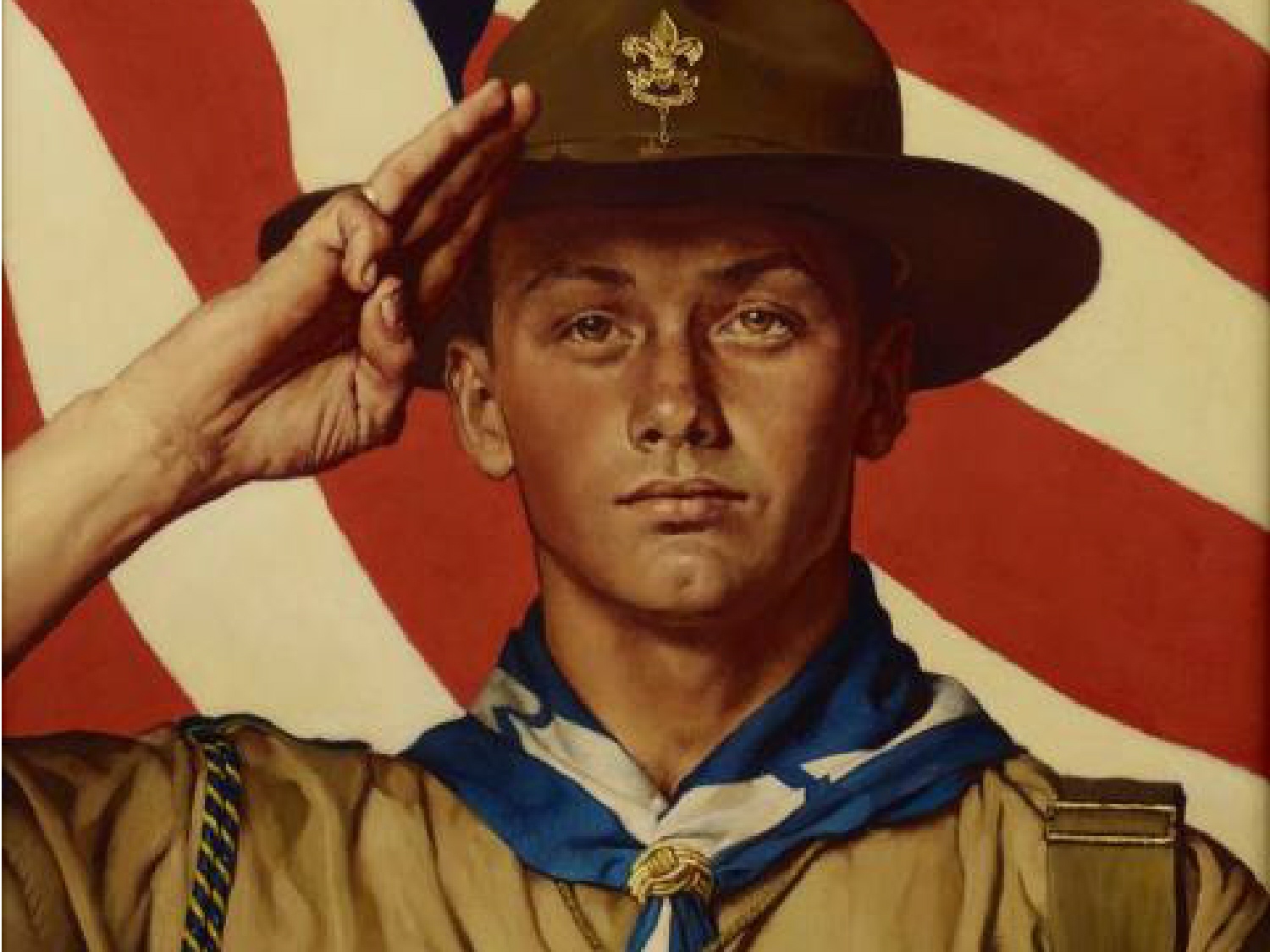 Growing up in the city there were several things that I thought I would never see in my life. Since Cleveland is not known for natural disasters, I never had a need to prepare for one. In my mind, hurricanes were up there with a Browns Super Bowl as something I thought would never happen. I mean, it is Cleveland after all. But that all changed when I moved my family to Southeastern Kentucky to finish up my degree.  It was here that I learned the lesson that every Boy Scout learns their first week: always be prepared.

It was just another average morning. We woke up and got ready for the day. My wife stepped outside to check the temperature and see what coat our daughter would have to wear. She looked back and said, “it smells like a fire out there.” Since we live in an area where people use wood heat I wasn’t too concerned…until I got to work. I opened my inbox to an email that said, “the mountain is on fire.” Okay, so maybe it wasn’t as blunt as that but the message was the same: the mountain that we live on was, in fact, on fire. Now, we were never in any real danger, but it definitely made me realize that we were not prepared for it.

If my week-long stint in the world of Boy Scouts had taught me anything, it was these two things:  Mr. Jeffrey’s made delicious Kool-Aid, and to always be prepared. Always being prepared is something that we need to remember as it can make any situation much easier. This lesson is also the easiest one to forget. In our current day and age, we oftentimes are complacent and that can cause us to rely too much on what’s convenient, like the ability to go to the store and buy whatever we need. But sometimes we cannot count on that.  Power outages or various other things can affect our daily routine in big ways.

Over the summer, a storm came through our area and knocked the power out for 24 hours.  My family had not expected this storm so we weren’t prepared when it came. Our 18-month old daughter had milk in the fridge that was at risk of going bad, and we had no way to cook. And to make matters worse, we didn’t have enough canned goods. We were never at risk of any serious harm, but it sucked.

There are several steps that you can take to ensure that you are sufficiently prepared. Whether the crisis is a power outage, frozen pipes, a broken down vehicle, or an evacuation, these two experiences have taught me several lessons that I would like to pass on to you:

Life has a way of sneaking up on us and bringing the unexpected with it. The storm came through and knocked the power out just before payday so the pickings were slim in the pantry. We had been meaning to get to the store but kept putting it off because, well, I hate shopping and just didn’t want to go. So it was no surprise when we were without any means to cook dinner. Luckily for us we had a friend with a grill so we weren’t totally left without a way to cook, and we still had enough food to get us through the day. Had that power outage lasted for three days, we would have been in serious trouble.  Especially considering we would have run out of milk for our daughter.

I am not saying that we all need to dig a bunker and keep a 20-year stockpile of freeze-dried meals and canned soup. But I am saying that it is always a good idea to have a few extra canned goods and some extra water on hand. 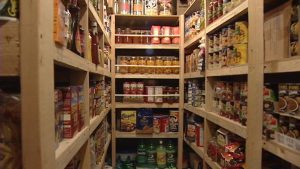 According to ready.gov, the rule of thumb for keeping water on hand is having one gallon per person for three days. So for my family that means 9 gallons (give or take) for three days.  For food, it will look different for everyone. You can pick up some ravioli or emergency food packs from Walmart. Either way, it is always a good idea to make sure that you have enough for at least three days. You never know when a storm is going to come through and knock the power out…or worse.

This is a sentiment that I have heard echoed throughout shooting ranges, but it also applies to other areas of life. Take jumper cables for example.  How often do we think about jumper cables? Usually we buy them on a whim, toss them in our trunk, and go about our daily lives. We tend to forget about them until our car won’t start. Or how about fire extinguishers? Any newlywed couple will know just how important a fire extinguisher is to have in their kitchen.

All joking aside, there are several things that are always good to have on hand in your car, on your person, or in your home. I always make sure that I have a set of jumper cables, a flashlight, and a tow strap in my car.  I have used all these in various situations and all were good to have because I didn’t expect I’d need to use them. On my person, I never leave home without a knife.  Not because I plan on getting in a knife fight with Jackie Chan, but rather because I have had to cut various things in my day to day life.  I could have gotten along just fine without it and used a key, but it was just that much easier with it available. 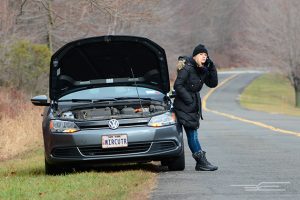 As far as home goes, I make sure that I have a blanket in every room to be used to climb out of a broken window in case of a fire. I don’t plan on a fire happening but again, I would rather have it and not need it than need it and not have it.

Take a look around, find out what you may need, and make an effort to get it. What works for me may not work for you. You may feel more comfortable carrying around a pocket knife, but you may not need one.  Find out what works for you.  Not your neighbor, but you.

This advice is all well and good, but it means nothing if you don’t have a plan. When we think about certain situations we may find ourselves in, it is important to note what we will do if it happens. The day that we found out the mountain was on fire we were told that we were not in danger, but we also knew the unpredictable nature of forest fires.

Before we went to bed that night, we had decided that we would pack a bag and put our family documents in it. We decided where we would go just in case it took a turn for the worst, and we would have to evacuate. We knew that we would likely not need to, but having a plan put our minds at ease. 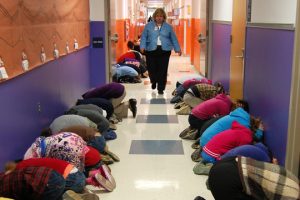 All said and done, we were never in any real danger. But it showed us the practical side of preparedness and having a plan. We knew that we would be okay, but it was still a little nerve wracking knowing that there was a fire raging a few miles away.  Especially with our child in the house. I’ll tell you, being a parent changes a man.

You can have all the latest tools and gadgets and the top-of-the-line stuff. But if you don’t know how to use it when the time comes, you might as well have a brick because it won’t help you. So have a plan and talk it over with those in your family ahead of time. Understand what may happen around you and practice what to do. If you live in an area where mountains may catch on fire, then have a bag packed and know what to do just in case. Live in tornado alley? Best to know the safest room in your house before the wind picks up. Have a teenager that loves playing with matches and fire? I would suggest getting a fire extinguisher to keep in your house and the number to a good therapist.

There is a reason why schools and workplaces have fire and tornado drills. They understand the practical implications of preparedness. They understand that practicing when we are calm leads to a successful mindset when the time comes to use it. Why not bring this home?  Like I said, it is better to have it and not need it than to need it and not have it.