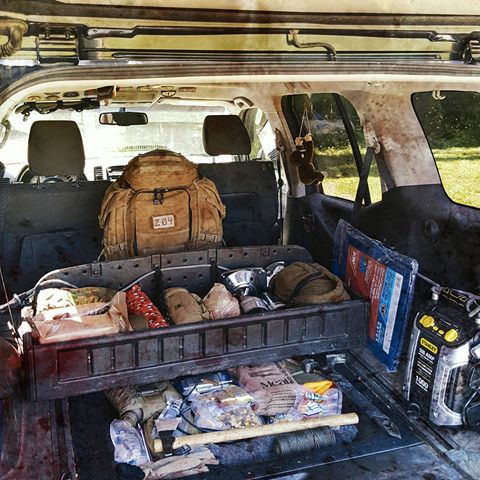 Last time we talked about why you would carry EDC items in your vehicle. Your vehicle has the largest real estate, second only to your home. As such, the minimalism aspect of EDC relaxes a bit and the items carried in your pockets – and possible backpack – are complemented by additional items.

vEDC, what to drive around with?

The items you can carry in your vehicle vary just as much as the previously discussed backpacks and pockets. Your region, training, and hobbies all have an impact on what you carry; but here’s a few things you should consider:

–Combination battery charger and compressor – If you haven’t experienced a dead battery or a flat tire, you will eventually. That’s not to sound pessimistic, it’s just realistic. I’ve had more than one occurrence of both, some of which happened after purchasing the Stanley combo unit. I can say that it makes such roadside emergencies much more bearable.  I will say that the built-in flashlight is worthless, but the USB plug is nice if you’re battery is dead on your vehicle and your phone.

–Tire plug kit – There’s really three types of flat: the slow leak that can be aired up enough to get you to a tire shop; the flat that has such a large hole that airing it up without plugging it is impossible; and the sidewall flat,  caused by a puncture by a massive rock or an entire blowout. A compressor can help with the first; a spare is needed for the third; but for the second, you’ll need a tire plug kit. They are cheap, pretty easy to use, and effective if used correctly. A tire plug will is not a permanent solution, but it can get you to a shop. (I’ve experienced all three: the third was a massive sidewall puncture in triple digit weather after spending all day at the lake, exhausted and out of cold water. FUN!)

–Air in the spare – The only thing worse than a flat tire – that can’t be aired or plugged – is a flat spare tire.

–Flares – There’s no telling if your potential roadside emergency will be during the day or night. If it’s during the night and you want to decrease your chances of your emergency getting worse, light it up with flares so that you can be seen by those driving by. This doubles if you are lost.

–A rescue tool – There’s a few choices here, but a cheap and effective choice is the ResQMe, available at local Walmarts and online. You might not ever need to burst out of your vehicle’s windows or cut yourself free from your seatbelts. For less than fifteen dollars, however, it’s a pretty cheap insurance.

–Water – No matter where you are, water is always important. Your location to a water source might determine how much you carry. For instance, I suggest a least a gallon of water, but I live next to a large lake and multiple streams. I keep two 20 oz bottles and a package of Portable Aqua water tablets. More often than not, dogs get my water and I just resupply.

–First Aid Kit – In the previous article I mentioned that carrying too large of a FAK can be inconvenient. IFAKs are great for backpacks, but for the vehicle you have much more real estate to keep a full fledge FAK. First Aid training is essential, though; otherwise, the kit is just a bunch of random supplies.

–Wet wipes/Germ-X – I’m a dad, I keep these everywhere. They’re great to have for children, dogs, or adult messy eaters.

–Even more flashlights/Flashlight batteries – I have a thing for lights. When the conversation that started this series occurred, I had around ten lights in my vehicle when my bag was in it. I also was carrying my fire bunker bag with three lights on it. I’ve since taken it out as it is only carried at certain times.

–Miscellaneous – You have room to carry way more in your vehicle, so carry the things you want. I have a couple of dog leashes/chest harnesses for our dogs and a bowl for them. In the nicer weather I keep an Equip hammock and a fishing pole/small tackle box in there. Depending on the month, I may have my fire gear with me. My FAK is a little different than one I’d suggest for most: I am an EMT and a volunteer firefighter and am often on scene of a medical emergency minutes before an ambulance.

Regional EDC (snow vs the sand, city vs rural, and beach vs mountains)

Whether it’s your pockets, your backpack, your vehicle or even your home, the items you need for an emergency are directly impacted by where you are. You should carry water in your vehicle, but the amount might be lessened by the proximity to potable water (0r dirty water and the addition of water tablets). People that live in a snowy environment can have plenty of water in winter months, after collecting and melting. Those that live in the desert have to deal with extreme heat and extreme cold, so a coat is necessary, as is additional water and something to keep you covered and cool.

If you live in the city your potential for being stranded might decrease but your possibility of coming across another in need increases (my battery charger/compressor has charged a multitude of strangers’ batteries in the city, while I’ve used it on my own vehicles only a few times). If you live in a mountainous area, rope, anchors, and other climbing gear might be prudent. For people that live in an area with a lot of lakes/rivers/oceans, a throw bag would be a great way to help others in an emergency. Again, training is very important for specialized items. Those that live in an area that encounters severe weather should take that into account as well. Even if severe weather is rare, it’s possible. EDC isn’t about the everyday circumstances but carrying items everyday to serve in extreme circumstances!

EDC scales, it can be as simplistic and cheap or as sophisticated and expensive as you’d like. As it has been reiterated, EDC isn’t just what you carry with you, but the thought process of the what as much the why. The philosophy of EDC is the balance of being prepared and not lugging around too much gear. Carry what you may need and only what you know how to use. You may not be the next Macgyver, but you should be prepared for whatever life throws at you.