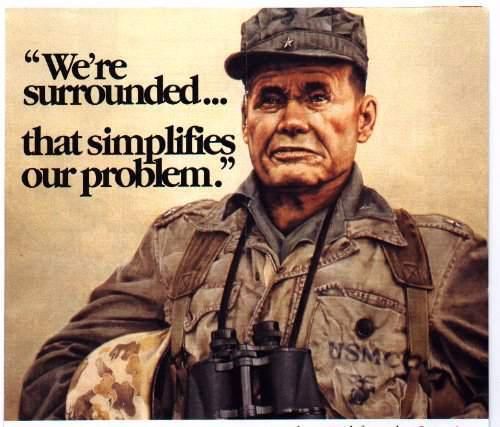 Every man has their heroes, a man that embodies the qualities they hope to possess one day. Such is my father for myself. My dad is a caring man who stands firm in his convictions, he’s a great provider, and loves his family. He has also given me a great example of a good father.

These men are often courageous, have taken on great adversity, and thrived during trouble. Such men confidently carry themselves, and every generation has these men. For my father, it was John Wayne.

I remember watching The Duke play Col. Mike Kirby in The Green Berets. One of the best memories with my dad is watching Hellfighters with him as a kid. Many turn to men such as John Wayne, Clint Eastwood, Chuck Norris, or Ron Swanson to be their manly role models.

These men have traits that exemplify what many believe to be the epitome of masculinity.

There is one man that many don’t think of when talking about this. He is a former United States Marine with an almost mythlike ethos. Those that have served in the United States Marine Corps know this name quite well. Marines consider this man an absolute legend. Many outside of the USMC are unfamiliar with him though.

Who am I speaking of, you ask? I am speaking of Lieutenant General Lewis Burwell Puller, otherwise known as “Chesty” Puller. This man is the most highly decorated officer in military history. His awards include five Navy Crosses, a Distinguished Service Cross, Silver Star, 2 Legions of Merits with Combat V Device, Bronze Star with Combat V, Three Air Medals, a Purple Heart, amongst 32 other additional awards. This man earned Two Navy Crosses in Nicaragua, one in Guadalcanal, one on New Britain Island, and one in the Battle of Chosin Reservoir in Korea. He would also be awarded a Distinguished Service Cross for his actions during the same battle. Notice how long this paragraph is? That’s just about his awards.

The man was an absolute legend.

His awards speak volumes to the man’s character. But Chesty was also known for his blunt nature, hard-head, and his quotes. Some of his most notable quotes are as follows

“I’ve always believed that no officer’s life, regardless of rank, is of such great value to his country that he should seek safety in the rear…officers should be forward with their men at the point of impact.”

On The Fighting Spirit of the Marines

“The safest place in Korea was right behind a platoon of Marines. Lord, how they could fight.”

My personal Favorite comes from the first time he saw a flamethrower.

“Where the hell do you put the bayonet.”

The man saw a weapon that shot literal flames 140 feet and his first thought was “How can I stab someone with it?”

There is one quote that sticks out among the rest, though. It is one quote that shows the bravery of one of the most decorated war heroes in the history of the United States Military.  It also serves as a reminder of what should be the attitude of Christians in a postmodern age.

“We’re surrounded. That simplifies the problem. They are in front of us, behind us, and we are flanked on both sides by an enemy that outnumbers us 29:1. They can’t get away from us now.”

In November of 1950, Lt. Gen. Puller and the Marines of the 1 Marine Division were facing 120,000 Chinese Troops. The days leading up to this battle saw the entire X Corps was overwhelmed by the Chinese force. For the “attack in another direction” (retreat) to take place, the X Corps would rely on the 1 Marine Division to act as a safeguard for the retreat.

One Division of US Marines

Throughout the battle, the Marines, led by Lt. Gen. Chesty Puller, would break through the lines, decimate Seven Chinese Divisions, and cause an estimated 40,000 and 80,000 deaths to the Chinese Army. The 1st Marine Division would lose 4,385 men to combat and another 7,338 to the cold. As a result of their actions at the Chosin Reservoir, the X Corps was able to retreat, and the Chinese Peoples Volunteer Force’s Ninth Army Group was destroyed. They would not return to the front until March of 1951. The actions surrounding the 1st Marine Division also bolstered the resolve of the United Nations Command.

What was the reason for their incredible success? The attitude of their leader.

Amid overwhelming odds, where one division faced off against ten divisions of Chinese forces, fighting in -30 degree weather, over hellacious terrain, with minimal supplies and no hope of reinforcements, one man rallied those around him with a simple change in perspective.

“They can’t get away from us now.”

The Church is facing a similar battle. One that seems to be insurmountable by all earthly standards. For the first time in its 80-year existence, Gallup has released polls that show that only 47% of Americans are members of a house of worship. Notice the wording there. See that I didn’t say “church.” I said “house of worship.” That is because 47% of those polled stated that they belong to either a Mosque, Synagogue, or Church.

Here we see a very concerning trend. It reveals to us the current state of, not only our culture, but the Church as well.

Yes, there will be some who say that you don’t need to go to church to be a Christian. And to that, I say that yes, that is technically correct. You are saved by the work of Christ on the cross and NOT your attendance. However, your attendance will be a fruit of your relationship with Christ. For a believer to be outside of the authority of a Biblically qualified Church, is to be living in habitual sin. While some cannot attend the weekly gathering, and others may have to leave for a brief season, for the average person who is able-bodied and capable to go, it is a sin to be outside of the Body. Period.

Of the 47% that responded as being a member of a house of worship, churches make up a fraction of that. Bible Believing Churches that proclaim the full Gospel is even less.

For the first time in American history, the sinful man is no longer hiding in the Church.

He has taken his message to the streets. Are there some goats among the sheep? Assuredly, but the goats are more comfortable now and no longer feel as if they must hide.

“Be watchful, stand firm in the faith, act like men, be strong.”

The Lord has given us the command to be watchful, to stand firm, to act like men, and be strong.

When we look to the world, it is easy for us to recognize that some are doing whatever they can to undermine the faith. We can see the rise in unbiblical sexual ethics, decline in biblical literacy, and acceptance and celebration of sin. It is clear because it is so obviously against the Word of God. These are acts of the will that defy God. What about in the Church? What about in our lives? Are we being watchful? Standing firm in the faith? Acting like men? Strong?

The phrase “act like men” is the Greek term“Andrizomai“. Its use in a military context calls for courage and strength. In this passage, Paul is using it to encourage the reader in obedience to Christ. By using this term, he is saying that our courage and strength do not come from ourselves, but instead come from the Lord. Our strength isn’t our own. Our strength comes from the Lord. If we are to act like men, then we must do so in the power of the Lord.

When men stand firm and act with courage, we see great things accomplished. Had the men of the 1st Marine Division run from the fight, we would be telling a different story. Instead, one division of motivated men fought with conviction and courage and overcame incredible odds.

There is a fight in our churches and the culture.

“We’re surrounded. This simplifies the problem. They are in front of us and behind us. We are flanked on both sides by an enemy that outnumbers us 29:1. They can’t get away from us now.”

Because when men stand firm with courage and conviction and stand firm in the Lord Jesus Christ, the battle is already won.